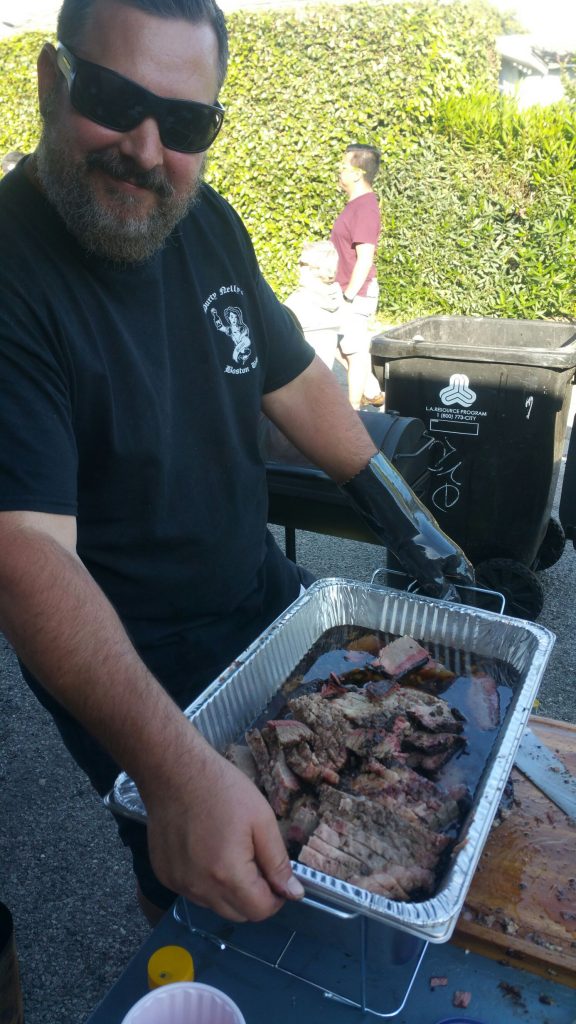 My journey in barbecue started about 15 years ago when a friend of mine was moving and he gave me his old, beat up gas grill. I loaded it up in the back of my truck and I was about to drive off when he came running over with a giant spatula in his hand.  As he handed it to me he said, “If you’re going to start barbecuing, you’re going to need the right tools.”. No truer words have ever been said when it comes to barbecue.  That friend has sadly since passed away, but I still have his spatula at the ready.

A few months after lugging that gas grill back to my apartment in Culver City, California, it crapped out on me.  Apparently my friend was as cheap as he was dead.  I then did what every other red blooded American does, I went down to the local hardware store and bought a cheap charcoal grill. I spent about 100 bucks, which to me wasn’t cheap at the time, and hence began my long journey into true barbecue.  This thing was tiny.  It could barely fit a whole chicken inside and leaked like a mafia informant.  But that’s when I started to learn just how great it was to cook with open flames.  An obsession was born.

The next thing I knew I was buying anything and everything I could get my hands on, chicken, beef, pork, lamb, fish, vegetables, etc., you name it.  I tried to cook everything on that grill.  Soon enough, I ponied up and bought my first offset and started to cook “low and slow”.  I was smoking something new every week.  My clothes smelled like smoke.  I smelled like smoke.  My home smelled like smoke. Even my cat smelled like smoke. I began to realize that I was burning through a lot of money and food trying new things (and failing).  If I wanted to really get good at my new obsession I would need to learn from the pros.

I started to buy books, spoke with my friends who were chefs, binged watched cooking shows, and of course, spent hours and hours watching online videos.  Anything I could get my hands on regarding barbecue I read, watched, or listened to.  I spent months researching recipes, trying out new things, watching long boring videos, mostly of someone fumbling around with a phone camera and talking way too much about their special rub that only they know how to make.  (eye roll) And then it hit me, I needed to make a website for people like me. I just wanted to learn what I needed to learn and skip all the needless information and chatter.  I was sure other people out there felt the same.

I was inspired by the quick little online cooking videos some other sites put out.  No nonsense and to the point.  I feel that people today want information now.  I want to give you a general understanding of how to barbecue, and get you outside cooking.  Barbecue is about being outdoors and being around friends, not sitting inside watching hours of videos.  You don’t need to follow my recipes exactly other than internal temperatures.  I encourage you all to experiment and try something different.  You will ruin some food, you will burn some meat, you will singe some hairs, and everything you own will smell like smoke. Learning to make amazing barbecue is a great journey and may your journey be as pleasurable as mine has been.

Barbecue may not be the road to world peace, but it’s a start.Anthony Bourdain